In a sea of beautiful Victorian buildings on Centre Street on Amelia Island, our picturesque red brick courthouse is a standout. One of the finest surviving Victorian courthouses in Florida, the Fernandina Beach Victorian Courthouse symbolizes Fernandina’s architectural Golden Era.

Are you interested in learning more about historical sights to see on Amelia Island? Request our complimentary Vacation Guide!

This scenic red brick building was built in 1891 in the Classical Revival style. It features cast-iron Corinthian columns and a tall bell and clock tower. The bell – used as a fire alarm until the 1930’s – was cast by Meneely and Company in West Troy, New York. The oldest Courthouse in Florida, the Fernandina Courthouse is a testament to its original builder’s capabilities.

In 2002, the building hosted a grand re-opening after a complete rebuild and restoration effort. Paint samples were sent off for testing so that original colors could be used, and the ornate front doors were restored, rather than replaced.  Since so much of the interior was constructed with heart pine, workers constantly were breaking bits as they were trying to drill into the beams. The adage, “they don’t build ‘em like they used to” really applies here.

Excited by interior Victorian architecture? The inside of the courthouse is beautifully preserved! If you are a fan of criminal history, the Courthouse should be a must-see stop while you explore Amelia Island History.

3 Historical Sights You Will Want to See on Amelia Island

Amelia Island’s rich history is full of places to visit! From state parks to museums, to the Fairbanks House itself, you will never run out of new sights to discover!

If you are looking for some military history, Fort Clinch State Park is the perfect destination. Built in the 1800s, Fort Clinch was never officially finished but has been used off and on by the military until World War 2! Entry is $2.50 and the fort has enough to keep you occupied all day long!

The Amelia Island Lighthouse is Florida’s oldest and is worth a tour! Originally built in Cumberland, Georgia, it was moved in 1838 to Amelia Island to serve the people of the island. Make sure to book a tour when you plan your vacation as tickets go quickly!

Known for its shrimping industry, Amelia Island has to have a museum dedicated to our tiny sea friends. The Fernandina Beach Shrimp Museum highlights the island’s history and success in shrimping.

Stay in the Historic Downtown District 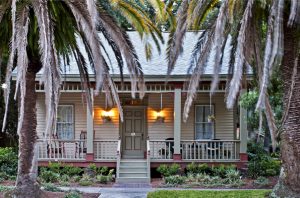 In addition to Amelia Island’s historic district, visitors can find some of the best restaurants and bars, shopping, and more historical sights to see! The Fairbanks House sits conveniently located in the historic Fernandina Beach district so that guests can walk to nearby attractions. We also provide beach cruiser bikes, umbrellas, towels, and coolers so that you can pack up for a leisurely ride to the beach, less than two miles away!

Our cozy yet spacious cottages set the scene for a relaxing, romantic getaway! For instance, the Hideaway Cottage sits tucked away and features Victorian decor, a double jetted tub, and a king-sized bed.

Start planning the trip you’ve been talking about for months!